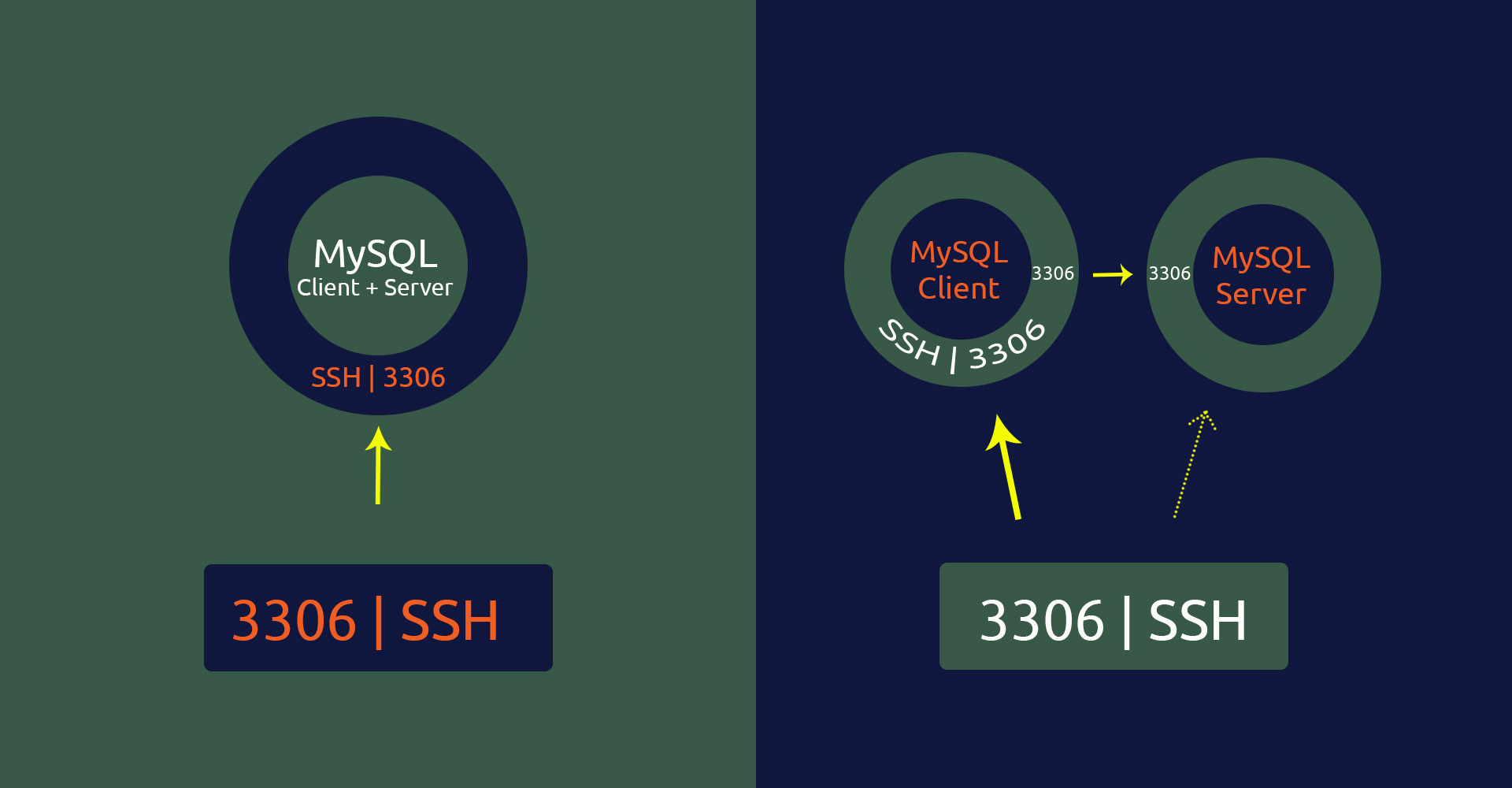 It provides the steps to remotely access MySQL over SSH Tunnel using Putty on Windows 10 and SSH on Linux systems.

We can securely access MySQL on a remote system by connecting MySQL over the SSH tunnel. This tutorial provides the steps required to remotely connect to MySQL server over SSH tunnel using Putty on Windows and SSH on Linux systems. It shows how to forward the local port of MySQL i.e. 3306 to the remote port of MySQL i.e. 3306 via SSH port 22 of the remote system. This ensures that we are communicating securely with the remote server over port 22, by connecting the local port 3306 to the port 3306 on the remote server.

A remote server having MySQL server installed on it. You may follow How To Install MySQL 8 on Ubuntu 20.04 LTS.

We also need SSH access to the system on which the MySQL server is installed and running. We can either use the SSH username and password or SSH username and the key to connect to the remote system.

We can use Putty on the Windows systems to access the MySQL server installed on a remote server. In case you are using a Linux based system, you can move to the SSH section. 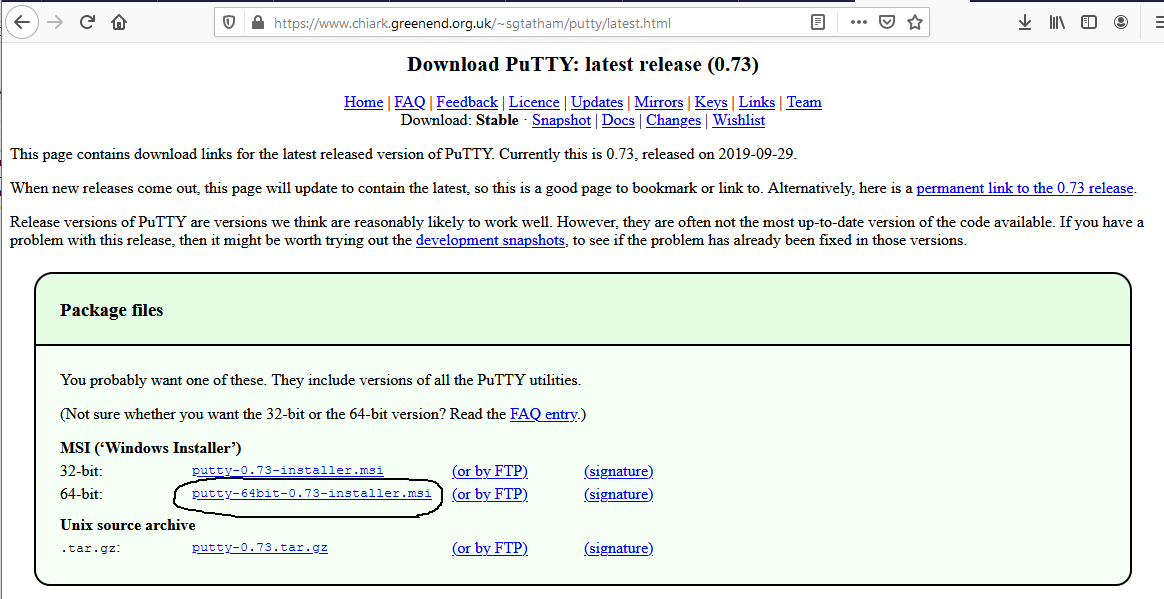 We can also use the Putty executable without installing it. Scroll down the Download Page to download the executable file.

Now launch Putty. The default options of Putty should be similar to Fig 2. 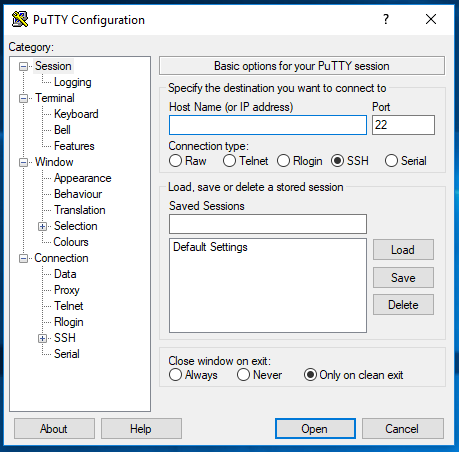 This section provides the steps to use Putty to securely connect to MySQL over the SSH tunnel from a remote system. Now fill the remote host details as shown in Fig 3. 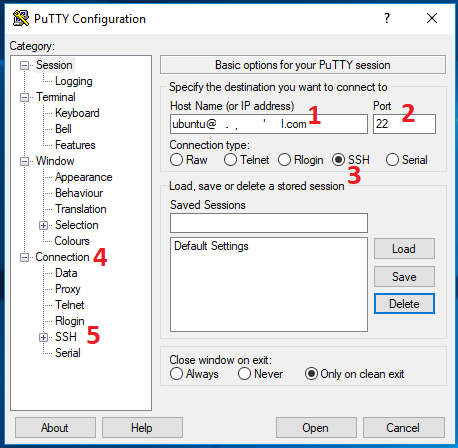 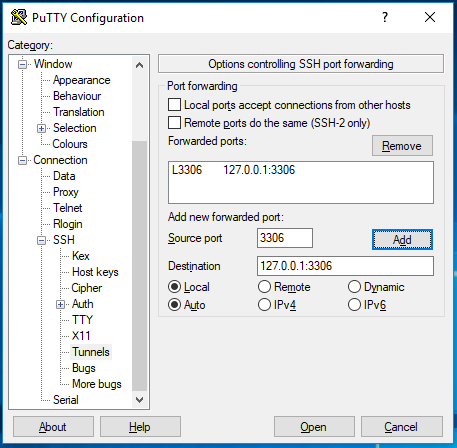 Click the Add Button after filling the Source port and Destination. It will update the Forwarded ports as shown in Fig 4. Also, click the Auth Option and choose the SSH key as shown in Fig 5. Make sure that you have generated the Private Key using Puttygen. 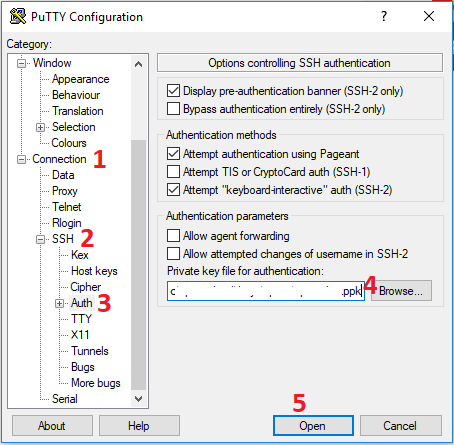 Now click the Open Button to open the connection. It will show the security alert for the first time as shown in Fig 6. 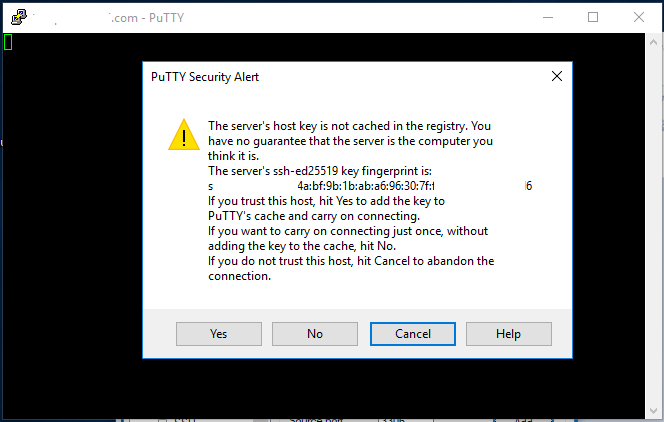 Click the Yes Button to accept the connection. It will ask for the passphrase in case you have set while generating the private key. On a successful connection, it will show the remote system details as shown in Fig 7. 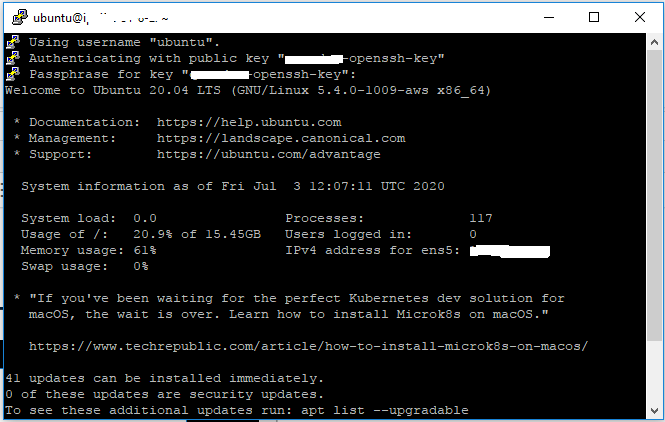 Apart from connecting over SSH, it also forwarded the local port 3306 to the port 3306 on the remote server. Do not close Putty since it keeps the SSH tunnel open to the remote server. Now launch any MySQL Client and try to connect to the remote MySQL server. I have used MySQL Workbench for demonstration purposes. The Home Screen of Workbench should be similar to Fig 8. You may also follow Using Workbench To Connect To Remote MySQL Server Over SSH Tunnel.

Now click the Plus Icon to create a new Local Connection as highlighted in Fig 8. It will show the options to Add Connection as shown in Fig 9. 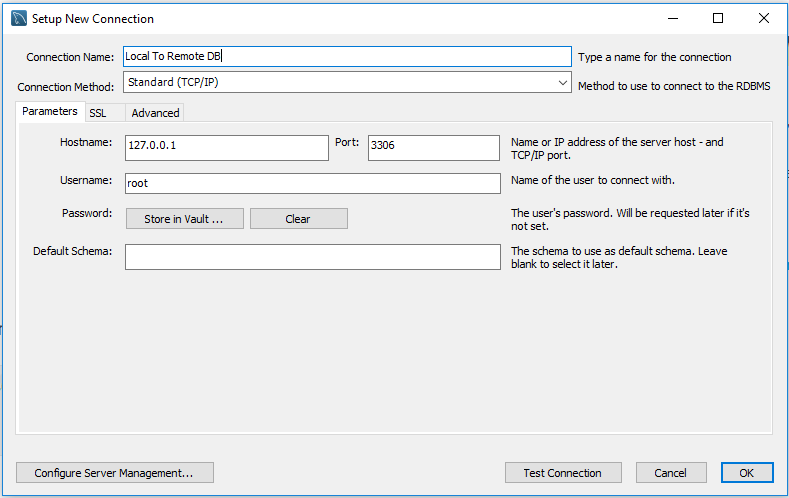 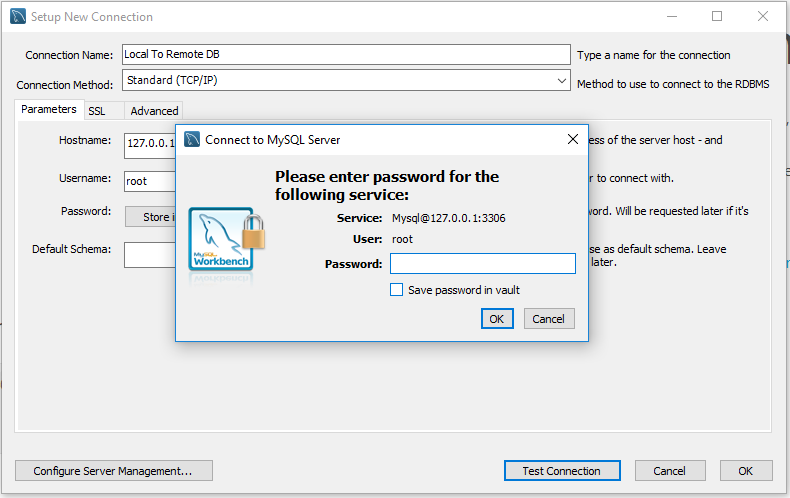 Now fill the password and click the OK Button to test the connection. It should show a success message on connection success as shown in Fig 11. 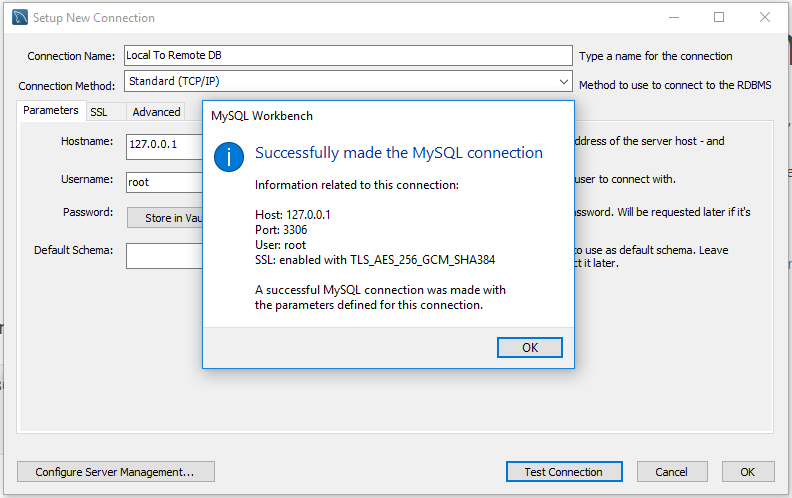 Now click the newly added connection. It should connect to the remote server and list the databases of the remote MySQL server as shown in Fig 13.

Notes: The below mentioned commands have been tested on Ubuntu Desktop. The steps and commands should be similar on other Linux systems.

The above-mentioned commands open the SSH tunnel and connect the local port 3306 to the remote port 3306. Now we can connect to the remote MySQL server using the MySQL client. You can refer to the previous section to use MySQL Workbench installed on the local system.

Also, refer the Fig 14 and Fig 15 to open the SSH tunnel and connect to the remote MySQL server. 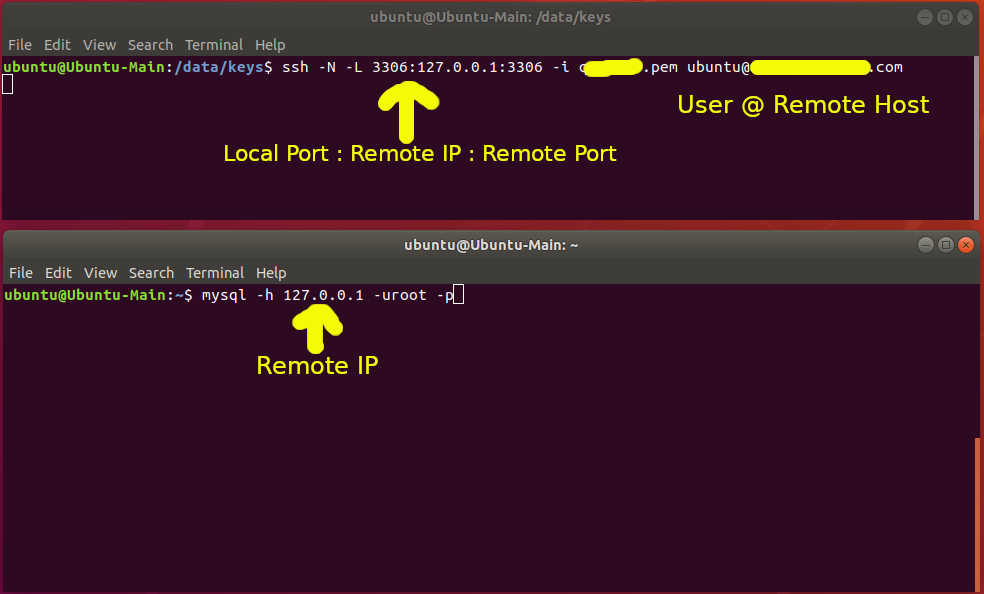 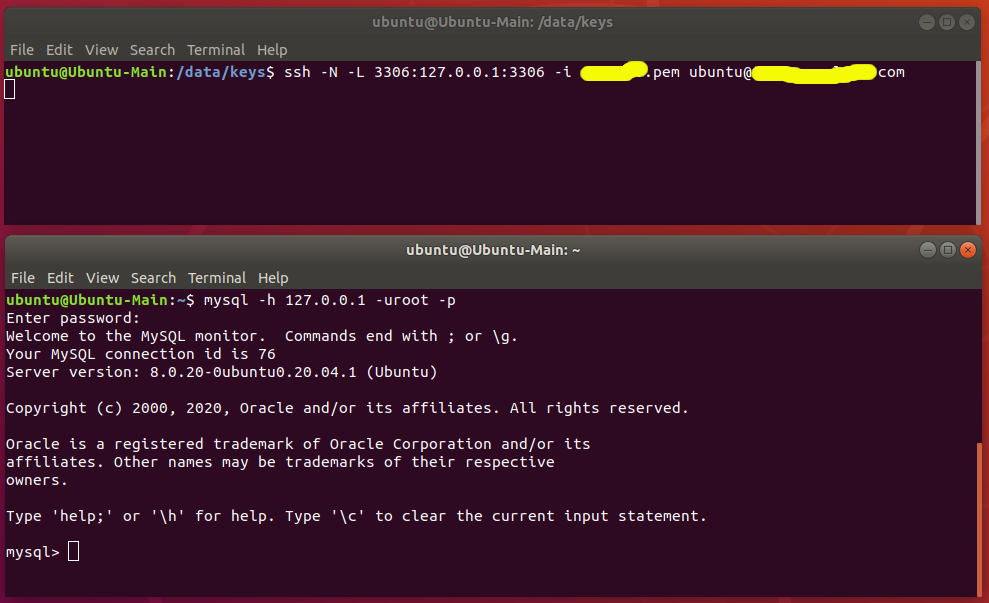 This tutorial provided the steps required to connect to the remote MySQL server over SSH tunnel for Windows and Linux systems.

How to store pictures in MySQL database

Guide To Design Database For Task Manager In MySQL

Guide To Design Database For Social Network System In MySQL

Guide To Design Database For Employee Management System In MySQL

Guide To Design Database For Notifications In MySQL